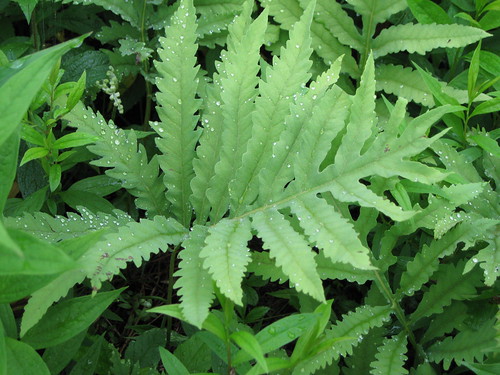 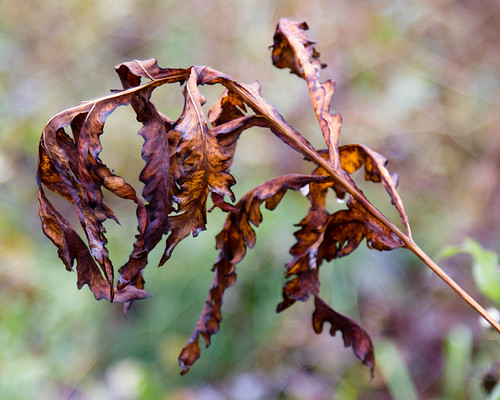 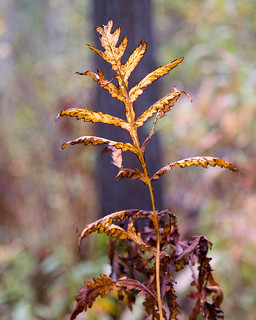 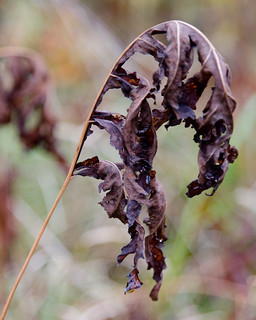 The little beads that hold the spores have set and will stay like this through the winter: 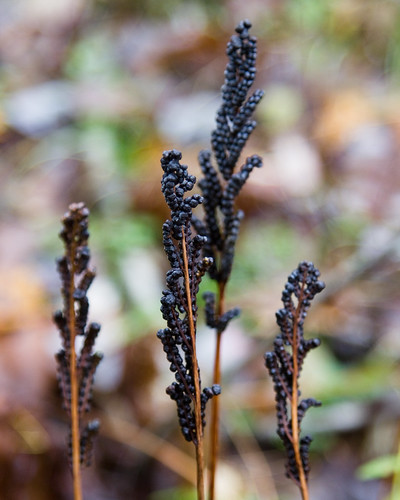 Google “osmunda” and the online dictionaries will tell you that the word refers to a genus of ferns. Cobb’s A Field Guide to the Ferns mentions that the name came from Osmunder, the Saxon god of war (os=god, mund=protector).  In other sources, I found that Osmund, the Waterman, once hid his family in a stand of Royal Ferns (Osmuda regalis) during an invasion by Danes.  After ferrying the enemy across the waters, he was able to rescue his wife and daughter from their hiding place.

Another source claims a Latin origin where os=bone and mundare=to cleanse, referring to the herbal use of the Royal Fern (Osmunda regalis) for treating injuries.

Whatever the etymology, the family Osmundaceae – The Flowering Ferns – contains one genus (Osmunda) with three gorgeous species in our region, all of which can be spotted in the Red Pine Forest at Audubon.

Most plentiful are the Cinnamon Ferns (Osmunda cinnamomea).

At this time of year (mid-late spring), it is easy to spot a Cinnamon Fern by the fertile fronds – which grow separately from the vegetative fronds – in the middle of the clumps and are, when mature, the color of the spice that is their namesake.  These fertile fronds were green when they first appeared before the leaves, and they will whither first, too.  If you come after the fertile fronds have gone, look for clumps where the sterile leaves are mostly erect and where the stems have a slight groove.  (In comparison, the leaves of the Interrupted Fern curve outward and the stem is round.)  Also check the back of the frond.  Cinnamon Ferns will often display little fuzzy tufts at the base of each leaflet.

The fertile fronds of the Interrupted Fern (Osmunda claytoniana) are, well, interrupted.  At the bottom and top of the frond are sterile, green leaflets.  In the middle are the spore-producing fertile leaflets which start out green in early spring and turn brown as they ripen.

Not all of the fronds are interrupted in this way.  So check the stem to see if it is round, rather than grooved.

Last, but certainly not least, is the Royal Fern (Osumunda regalis) – the one that looks (to me) least like a fern.

With Royal Fern, the fertile leaflets appear at the top of the frond and, as with the others, they start out green, but turn brown as they ripen.

In all three of these species of the Osmundaceae family, the spores themselves are green and capable of photosynthesis.  They are short-lived and must germinate within a few days to be viable.

Fascinating to me is the life cycle of ferns…  Spores do not produce ferns…  well, not directly.  A spore grows into a gametophyte which contains both egg and sperm producing parts.  According to Associate Professor Raymond Milewski of East Stroudsberg University in Pennsylvania, the sperm will “swim across a surface film of water” to reach the egg.  SWIM?  Whoa…  (Click –> here for a You-Tube video!)  A proper fern will develop from a fertilized egg.

If I have ever seen a gametophyte, I didn’t know it at the time.  Now I want to see one…  Hmm…  I wonder how big they are…  Could I find one in the woods?

Sensitive Fern (Onoclea sensibilis) is also known as Bead Fern, and what better time to see where that name came from than in winter when only the beads remain.

The beads are actually modified leaflets on the fertile frond.  Each rolled and dried leaflet contains spores – one of the ways that ferns reproduce.

As I was surfing around the ‘net to find interesting facts about this plant, I ran across the American Fern Society website.  If you need more proof of the incredible variety and wonder of the natural world, go to their site and click “Fern Basics”.  Read about fern reproduction.  I must have learned that years ago in Biology… But I had forgotten!  It’s pretty fascinating.  (Of course, I’m easily fascinated.)

The common name Sensitive Fern comes from the fact that this will be one of the first plants to wither with the first frost in late summer or fall.

Folks living along the east coast in the southern most states of this range should be aware that Netted Chain Fern (Woodwardia areolata) resembles and often grows with Sensitive Fern.  It’s fertile frond is completely different, however – green with spores forming on the underside of the leaflets.

This moss was so interesting… long and different from the Frosty Moss I posted under Textures.  I have never tried identifying mosses.  Do they have common names?

Foamflower is one of my favorite spring ephemerals.  I was surprised to see so many leaves up…  Are they always there, under the snow?  Or did the 60-70 degree days bring them out prematurely.  Last year, we had many beautiful blooms.  I will be curious to see if this spring brings as many.

But I don’t want to find out until I’ve had at least one chance to use my snowshoes!