And we’re done! We saved this little .8 mile hike for last, figuring we could duck into the Admin Building after to claim our prizes – a water bottle and a sticker. (I gave them both to Emily.)

This trail hugs the side of the hill, so even though it is short, it is a little intimidating: one mis-step and you could be rolling down the hill!

We started the Allegany 18 Challege on June 15 – the first official day of my retirement. And we finished before the end of summer. We had hoped to finish before Emily started back to school, but a brief illness and some aching muscles delayed a couple of the hikes. Still, WE DID IT!

Thanks to Bob who provided rides for the hikes that were not loops, and to my friend Sue who hiked one of the non-loop trails with us, providing the second car so we didn’t have to hike it twice.

This is a black diamond cross country ski trail and after hiking it I can see why! I won’t attempt it on skis! The last bit is a half-mile repeat of Patterson trail that takes you down to the Bova area. There is a warming hut about half way around that I forgot about, so we ate lunch on a log just a tiny distance from the hut!

Perfect day for this hike. Cool in the morning – took us about 20 minutes of brisk walking to get warm! After that, we were comfortable the whole time.

We had arranged for a ride back up to the Art Roscoe ski area to retrieve our car.

One more to go to complete the Allegany 18 hiking challenge! (We obviously did not do the trails “in order.”)

Rocks and Roots. That’s the best way to describe this trail. We took two cars so that we didn’t have to hike the full 4 miles, 2 of which would have been along the road. There’s a lot of up on this trail, as well as a lot of down (which is harder on my knees than up, I must admit).

We knocked this one off after Emily got off school on a Friday afternoon. Very pleasant hike. Two more to go to complete the Allegany 18 Challenge!

I don’t know if you can call what Terry and I do “hiking.” It’s more like meandering. Because we are never in a hurry and stop for 1 or 2 coffee breaks and lunch and photos, we often manage an average speed of 1 mile per hour. Today, .9 miles per hour.

We also rarely stick to the designated trails and love to go “bushwhacking.” Today’s meander started on Wolf Run Road, scooted into a Norway Spruce plantation, picked up the Finger Lakes / North Country Trail, then back to the truck via Wolf Run Road.

Many of these trees have giant squirrel middens under them.

I think Maidenhair Fern is my favorite of all the ferns.

There is a bridge over this creek on the FLT/NCT.

The fields were full of milkweed. We saw many kinds of butterflies, including a few Monarchs.

I love the look of wild Black-eyed Susans. They seem more delicate than the cultivated ones you find in gardens.

I can’t seem to resist photographing this tree. I wonder how many photographs I have of it now?…

It was warm. He found a way to cool off.

I took the road through Allegany State Park to get to a teaching gig in Bradford. I stopped at Science Lake to eat my peanut butter and jelly sandwich. 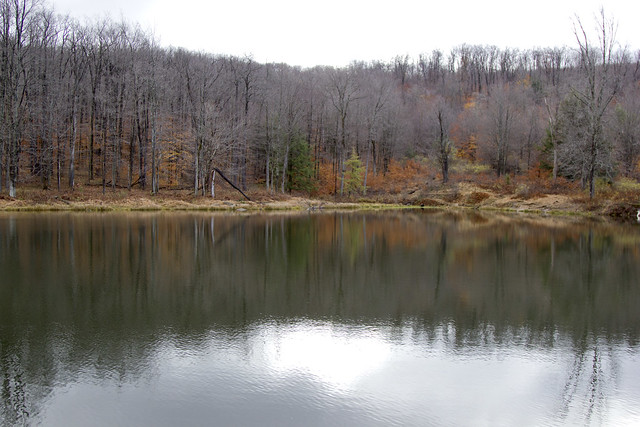 A park history (click here) says the lake was created in 1926, along with the Allegany School of Natural History. 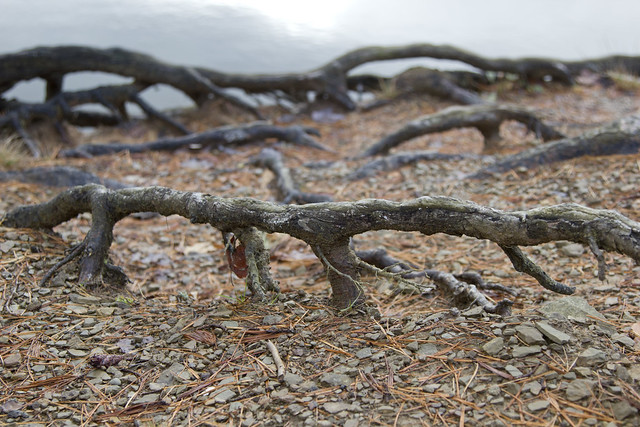 A roadside parking area makes access easy to the lake. Many feet on the shore have exposed the roots of the trees that hug the shoreline. 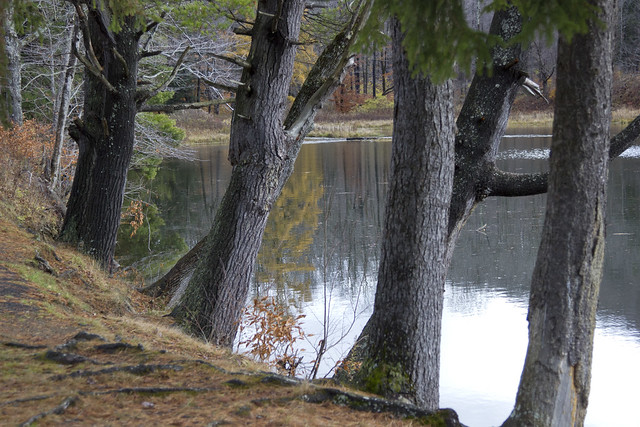 I find myself becoming more and more interested in the history of Allegany State Park. 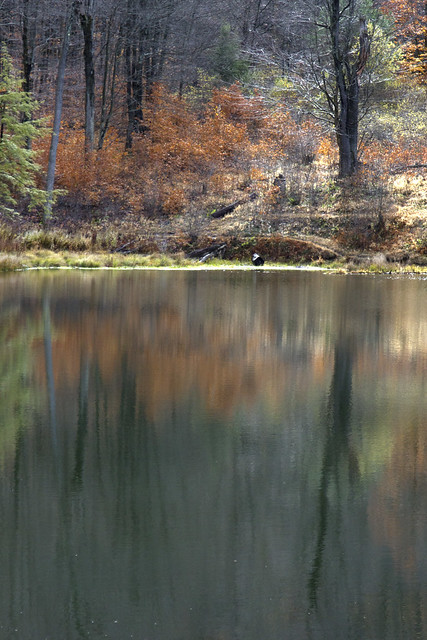 The first net check filled the bags and Tom had to work quickly in order to stay on his schedule.  Still, he took the time to teach Kyle and me as he worked.  There were some new birds, and young birds, and molting birds… and some tricky IDs for us.  I found myself getting frustrated sometimes and would say, “Well, I wouldn’t be able to band this one, because I don’t know what it is.”  Those Little Brown Birds are part of the reason that I’m such a Reluctant Birder!

I misidentified this one, for example.  Before you mouse over it, make your guess…

Did you guess Louisiana Waterthrush?  I didn’t.  I guessed Northern Waterthrush, which supposedly is yellower than this one.  Based on pictures in the field guide and on Cornell’s website though, I’m still confused…  The songs are way different, though… but we never heard this one sing…

I did get this one right:

This is the first Black-capped Chickadee I’ve seen in a mist net:

I now know why the banders aren’t anxious to find them in the nets!  The poor little dear was hopelessly tangled.  But with infinite patience, Tom managed to get him out.

There were several American Redstarts in the nets… This male was very pretty:

Sometimes an ID pops into my head the moment I see a bird in the net, but then I doubt myself.  After checking and double-checking, I discovered I was right on this one:

There were lots more birds, some of which I photographed, and others that got processed and released so fast that I couldn’t keep up.  One of the highlights, though, was a bird we couldn’t band:

Tom isn’t licensed to band hummingbirds.  We brought her back anyway for photos, lessons, and to weigh her:  4 grams (0.141 ounces)!  Isn’t she so dear?

Thanks Tom, for all the great learning!